Fibroids are muscular tumors that grow in the wall of the uterus. Fibroids can grow as a single tumor, or there can be many of them in the uterus. The size of the fibroids may varies from very small size to big size.

About 20 percent to 80 percent of women develop fibroids by the time they reach age 50. Some women with fibroids do not have any symptoms. Some have pain and heavy menstrual bleeding. Fibroids also can put pressure on the bladder, causing frequent urination, or the rectum, causing rectal pressure. Fibroids can also present as a pelvic mass when they get very large.

Fibroids can be categorized into: 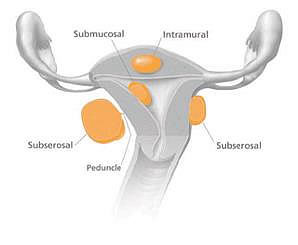 Usually a pelvic ultrasound can confirm whether you have fibroids. Sometimes other imaging tests, e.g. Magnetic resonance imaging (MRI) may be used.

Depending on your symptoms, you may be treated by medications or surgery:

Please consult your doctor to formulate the best treatment option for you.